1. Chemical symbols; ion charges of the most common ions
2. Electrochemical series
3. Oxidation and reduction
4. Redox reactions
5. Electrolysis
6. Electrode reactions and the PANC rule
7. Cation and anion
8. Electrolysis of various salt solutions. What happens at the cathode and anode?
9. How is nickel plated or zinc plated?
10. Galvanic Elements (Batteries)
11. Effects explained by the electrochemical series
12. Questions 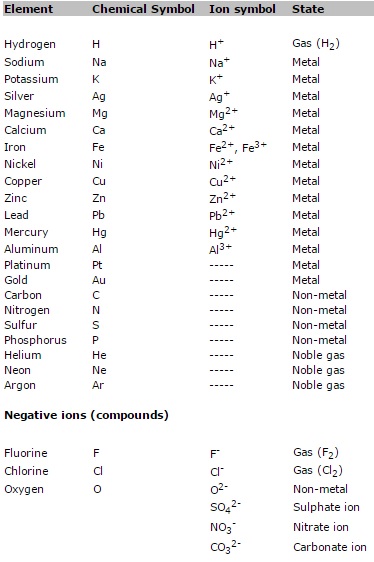 All metals in the periodic table are actually included in the electrochemical series. In the electrochemical series above are the metals that we are to work with. On the far left are the base metals and the farther right you go, the nobler the metals become. The metals to the left of hydrogen (H) are called base metals, while the metals to the right are called noble metals. If two different metals compete for electrons, the noblest will win. All acids contain hydrogen ions (H+) that dissolve base metals into ions. Noble metals are not affected by acid attack.

Oxidation means that an atom or ion gives away one or more electrons, thereby increasing the electrical charge, e.g. oxidation of iron into iron ions.

Reduction means that an atom or ion adds one or more electrons thus reducing the electrical charge, e.g. reduction of copper ions into copper.

When an oxidation takes place there is always a simultaneous reduction. This is the basis of redox reactions. If we look at the examples above, an oxidation can only occur when a reduction occurs. If iron is immersed in copper ions (copper sulphate) then both reactions occur simultaneously. The reactions can be written together as follows.

If you want to show electron transfer, this is done as follows.

With the help of electricity one can drive reactions. Below is the electrolysis of hydrochloric acid (HCl). At the negative terminal (cathode) hydrogen is created and at the positive terminal (anode) chlorine gas is created. The hydrogen ignites by the heat of a match (about 500 °C) and the chlorine gas formed is toxic. The electrodes consist of graphite.

Electrode Reactions and the PANC-rule

To help you remember which electrode is which one can make use of the PANC-rule. PANC stands for positive anode negative cathode. The cathode is negative because the battery above has electrons in the surplus that can be delivered here.

Likewise at the cathode two hydrogen atoms pair up together to form a hydrogen molecule (H2). This happens when each hydrogen ion is added one electron.

Electrolysis of various salt solutions ... what happens? Know theoretically what happens when different solutions are electrolyzed. What will happen to the cathode and anode?

Below is electrolysis of copper chloride.

How is nickel plated or zinc plated?

This can be done by means of electrolysis. Use zinc ions (Zn2+) or nickel ions (Ni2+) in solution. Let the metal object that is to be zinc plated or nickel plated act as negative terminal (cathode). Use the DC and start the process. Electrons will then be located here and reduce zinc or nickel ions to zinc or nickel.

Similarly, a metal can be a reducing agent if it instead gives away electrons to another metal. The other metal is reduced, i.e. has got a lower charge.

You can let the two metals compete in the “boxing ring” and fight for the electrons. The noblest metal will win the electrons and the weaker will lose theirs. The different ability of the metals to add electrons is measured in comparison to hydrogen, which constitutes the border between noble and base metals. The capacity is measured in volts (voltage). The two metals are compared on the capacity and there will be an electron current in the conduit between the electrodes.

Both metal pieces in the liquid below are made of two different metals. The electrode giving electrons to the other metal trough the conduit is the negative terminal (cathode). The electrode receiving electrons is the positive terminal (anode). The voltmeter will show a voltage. We have created a battery. If one of the electrodes would have been copper (anode) and the other would have been iron (cathode), the voltmeter would have shown approximately 0.3 to 0.4 V. If one had been a silver electrode (anode) and the other a zinc electrode (cathode), the voltmeter would have shown approximately 1.50 to 1.60 V. The ion concentration between the electrodes also affects to some extent what voltage there will be between the electrodes. From table collections one can calculate the voltage between electrodes of different metal types. Here, the ion concentration in the electrolyte is often 1 mol/dm3 (1 molar) and the atmospheric pressure is 1 bar.

Effects explained by the electrochemical series

If you are to nail a copper roof, you should use copper nails. If you use iron nails, then the iron will donate electrons to the copper as described above. There is always some moisture with salts between the copper and the nails of the roof. A galvanic current will be created, and iron nails will oxidize into iron ions.

Get a Free Evolving NGU Membership at AIC Association!