1. Oxygen entering the body
2. Oxygen uptake in the lungs
3. What does the heart look like inside?
4. Systemic circulation and pulmonary circulation
5. Why does the heart have two atria and two ventricles?
6. Blood circulation - arteries, veins, capillaries
7. Cellular respiration reaction
8. Questions

Inhaled air contains oxygen that enters our lungs. We breathe in air with 21 % oxygen and 0.03 % carbon dioxide. We breathe out 16 % oxygen and 4 % carbon dioxide. Below the lungs works a large muscle called the diaphragm. When the muscle tenses (contracts), it pulls the lower part of the chest cavity downward. The lower parts of the lungs are pulled along as well. The chest cavity is enlarged and the lungs as well. Air is flowing into the lungs. The diaphragm is shown in red.

Oxygen uptake in the lungs

The trachea divides into two bronchi (air pipes). One bronchus connects to each lung. The bronchus divides itself and at the end of each branch is an alveolus. The oxygen-poor (deoxygenated) blood from the heart (shown blue - dark red in reality) absorbs oxygen from the air. This makes the blood oxygen-rich (oxygenated: shown red - light red in reality). Carbon dioxide from the blood enters the alveolus cavity and is exhaled.
The oxygen migrates into the bloodstream from the alveoli because the oxygen pressure is higher in the air and lower in the blood. This pressure difference evens out automatically the best it can. The same principle applies to carbon dioxide, but the pressure difference is the opposite. 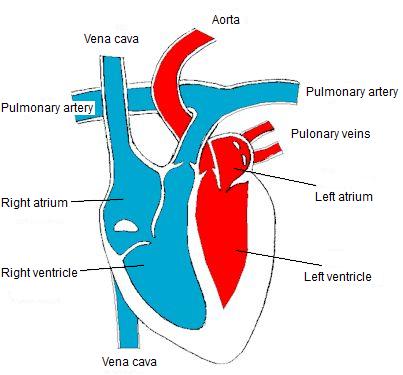 The heart is a muscle that continually pumps blood through blood vessels to all body parts. The heart pumps about 70 beats per minute. We say the pulse is 70.

There are valves between each atrium and ventricle but also between the each ventricle and outgoing arteries e.g. the aorta. When the ventricle muscles contract, the blood is pumped out trough the artery. At the same time, the valve between atrium and ventricle closes. These valves allow the blood not to be pumped back into the atria, but only the right direction. In the same way, when the heart is resting between the beats, the blood that just was pumped out through the artery, e.g. aorta, is trying to get back into the ventricle. This is not possible, because of the valves between the aorta and ventricle. These valves prevent blood from flowing back into the ventricle. When the doctor is listening to the heart with a stethoscope, the doctor is hearing beating sounds, da-thump, thump-da, da-thump...etc. It is the valves closing that sound. Try to see everything in front of you.

Systemic circulation: Oxygen-rich blood is sent out to the body through the aorta, the body's largest artery, to oxygenate e.g. the brain, liver, kidneys, muscles, i.e. all bodily organs and tissues needing oxygen. After the oxygen is consumed, it pours back to the heart finally through the vena cava.

Why does the heart have two atria and two ventricles?

To oxygenate the blood but also to rid the blood of carbon dioxide two circulatory systems are created. Oxygenated and deoxygenated bloods are not to be mixed. Therefore, a muscular wall in the heart separates the systemic and pulmonary circulations from each other. The white in the picture above is the actual heart muscle. A muscle can only contract. If you study the heart above you'll see what happens when the heart muscle is contracting. The blood is squeezed out.

The now oxygenated cells use the oxygen to produce energy. The energy enables the cells to work with their tasks, but also to maintain a body temperature of approx. 37 oC. The energy generating reaction is called the cellular respiration reaction. Carbon dioxide and some water are exhaled. This reaction occurs in the body cells.